The project began as a persistently leaking roofing system. When we first inspected the property the we realized the roofing system had been compromised by wind and hail damage. The primary concern was the lack of shingles in multiple areas. This roof was well over 50’ in the air so until the eave line is breached the damage could not be seen. Upon initial inspection we informed the RU group that a claim is most likely the best form of recourse for this project.

The insurance company met our inspectors at the project and after much persuasion the adjuster agreed to scale the immense climb to the eave to review the storm damage. She was quick to agree and make her way down. On site it was business as usual as the adjuster explained full replacement would be covered, however, when documents arrived to our client less than half of the roof was paid for and only the top layer of asphalt shingles.

Rather than argue the damage itself as the insurance company failed to execute a proper inspection, our recovery department issued a supplement for the additional layer of shingles as well as the slate removal for which the shingles were nailed in to. Dueto the fact manufacturers require wood substrate for installation and the ridge cap was covered in their partial estimate, a domino effect supplement was prepared for the carrier. Basically this is when one item causes numerous others to take place.

The shingles were removed and then the arduous and extremely dangerous and dirty task of removing 100 year old slate tiles from the roof. The slates broke into tiny pieces and were dropped to the ground. What normally would take just a couple hours to remove began a 2 day tear off process. Each slate had upwards of 6 nails in it from the multiple layers. The nails had to be removed and cleaned to the deck as required by shingle manufacturers. Once we stripped the slate it was obvious the project would need to be re-decked due to the spaced decking commonly used when slates were installed.

Our crew then installed the new decking system hoisted the system via a laddivator and started the typical installation of the GAF Roofing System. Ice shield, felt, starter and field shingles were installed and capped with ridge vent and high profile ridge vent. The shingle install took 1 day of work and our crew was cleaned up before dark. 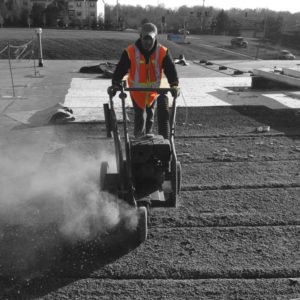 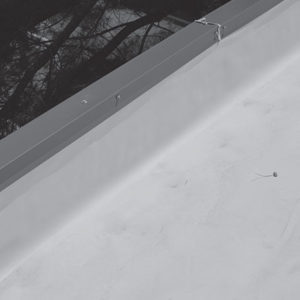