The Project at Old St Ferdinand Shrine was a very complex coordination effort. Although the overall size and valuation is not as significant as the contract work itself, it truly has been one of our favorite projects. In 1821, Father De Le Croix laid the cornerstone to this monument nearly 200 years ago before we were awarded the immense task to revive its majestic presence. From the moment our management team arrived on the property, to the finale of adorning the new copper crosses, our entire company felt honored in being trusted to restore this property that the catholic diocese deems protected historic ground.

Upon initial review our team realized the drastic shortfall in funding for the project. The project had been awarded only $144,000 in funding when we reviewed the initial documents from the insurance carrier CNA. With the extensive removal process, 130’ steeple, massive lightning rod system and numerous other factors our team first got to work on securing market prices and additional funding for the project. The project was negotiated up to nearly $366,000.

Once this was under way, the next step was not simply to pick out a new roofing system like most projects. Our owners and management understood that the challenge on this project would be to restore this project with all new waterproofing systems yet preserve the integrity of its character and mystique. As we explained to the OSF board, we plan to make this look beautiful, but old.

We started the project first by removing the flat roofing system on the schoolhouse. The EPDM and additional layers were removed to the deck and inspected for suitable replacement. We then added an R-20 Insulation system consisting of 3” and 1.5” ISO that we mechanically fastened to the deck. A fully adhered TPO system was then installed along the parapets, to the back side of the facade and field of the roof.

Once the low slope roofs were completed we began the tear off of the shrine. 10,000 SF of transite containing 19% asbestos had to be removed. In order to be safe and OSHA/EPA compliant our crews had to mark the job site perimeter upon entering the site. Once inside the perimeter, any person present had to have eye protection, respirator, full disposable suit (daily), disposable gloves (daily), and suitable foot protection. As the material was unloaded from the roof it had to be constantly wetted, wrapped inside visquine and packaged for disposal. The tear off was a 10 day process.

As the asbestos abatement team moved from slope to slope, the roofing crews would follow up at the days end installing synthetic

underlayment and ice shield in the areas removed in order to dry in the roof.

Before choosing a product to re-roof the shrine with, we studied antique photographs and drawings of the original construction. It was evident that the shrine had originally been roofed with cedar shakes. Shakes used back in the 1800s were oversized in comparison to todays cedar. We also discussed the history of the building and came to realize it had been victim to two major fires. In order to attain the look we desired, longevity of product, and prevent future vulnerability to fire we chose to roof the shrine with Davinci Bellaforte Shake in the Verona Color. This product was 50% lighter than the asbestos removed, which lessened the load on the aging building and offered a fire rating & impact rating that the shrine would experience a drop in their insurance premium.Our craftsman installed copper valleys and custom bent copper reglet flashings to install along the parapets and 3 fire places. Copper counter flashing was installed at all of the intersection points as well.

Before capping the roof, we enlisted the help of lightning rod guru J. Donohue who made the trip up from Texas to be part of the special project. We wanted to ensure the thousand feet of copper cable would not be disturbed so we installed the system beneath the ridge cap and inside the downspouts for safe keeping. We bored holes in the ridge cap where they intersected terminals, then sealed with ice shield and silicone to waterproof these areas.

7” trough galvanized gutter systems had to be installed in order to match the existing look of the building. This system demanded intensive labor welding each seam end cap and down spout elbow.

Our tradesmen then began the revitalization of the bell tower. The tower is 75’ in the air and was in desperate need of carpentry and structural repair. Our men worked to shed the existing layers of paint, replaced the ornate details where needed and repainted the tower in a scheme more reminiscent of its original form. Stained Glass, Barn Red and Rushing River were chosen as the three colors. While working up on the bell tower they rebuilt new spires on the footing of the steeple.

The remaining portion was a 6 week project slate replacement and recreation of the original steeple. The original design was painted white nearly 75 years ago but with some careful research and planning we restored it as it had been originally slated. The steeple was slated with 3 colors. Vermont Black, Unfading Green and Unfading Red were used to recreate the steeple design. Vermont Black was the primary color accented with zig zag designs, florets, stripes, and fleur de les. The project at the time was the most intense ever with heights of 135’ to the top, custom copper crosses, lightning cables and intricate patterns that demanded perfect execution. 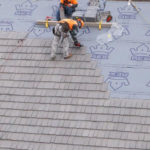 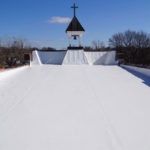